So the first thing to report because I should have reported it days ago is that I got my Frends of Skeezix package!! It came.....um I don't know. Dozens of naps ago, but first I didn't have the pictures off the camera and then the OTW was hogging the computer and then I forgot. I'm sorry Skeezix. I don't think I deserve to be the President of your Canadian chapter since I can't even remember to say I got your great buttons. 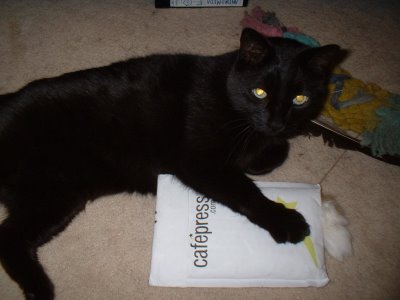 This is me with the package. The Big One made the OTW wait and wait and wait until I was done napping so I could open it, and he wouldn't let her do it. I think all the training is starting to take on the Big One. Though I don't know why she just didn't wake me up and tell me the package was here! Naps are important but so is my package from Skeezix 'cause it took so long to get here. I think the man in the blue shorts up here has to bring it by dog-sled!!!! 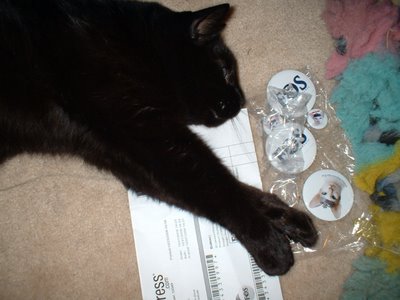 Here I am admiring the buttons and the really good paper to lie on. 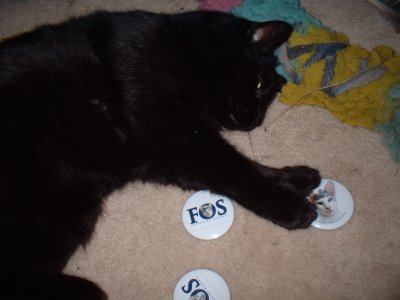 I was right Skeezix! They do make great hockey pucks!!! I sniffed them good, and batted around them a bit. 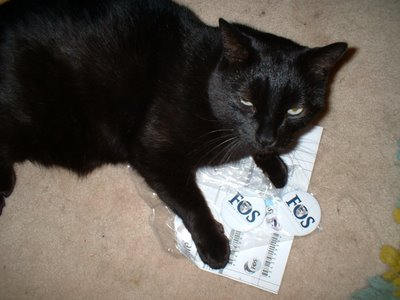 This was me when I realized the OTW stole one of them and put it on the fridge!!!! It was the bestest one, that had the big picture of Skeezix and was a good hockey puck whichever side it was laying on, too!! As you can see, I sat on the rest and glared so she couldn't steal anymore!!!

The second bit of news is that my peoples are safe home. They even came back when they said they would! I couldn't believe they left though!!!! When my OTW snuggled me just before leaving, she told me she would miss me lots (well, I knew that!!!) and that she loved me (again, not so much with the surprises there, human!) and that she'd be back the very next day in the evening (which she was) and when she put me down I jumped straight into the little box and started gnawing on the flap which makes her laugh, and she picked me up in the box and I licked her nose and was the sweetest, bestest, most adorable cat that ever did live, and she still left!!!!!!! And she called me a monster on the way out!!!!!!!!!!!

When she got home she said they were safe most of the way even though they saw three vishus moose-deers, because most of the way they were driving really really fast. She said the Big One drove one hundred and twenty kilometres per hour!!! She said if I'm going to tell my friends about it, that one hundred and twenty kilomtres per hour is about the same as seventy five miles per hour, which is very very fast, and the vishus moose-deer only glared at them 'cause they could never ever ever ever catch them when they went that fast. The Big One says, "unless the vishus deer start mating with cheetahs and making vishus cheetah-deers" and laughed a lot.

Well of course that would never happen because cheetahs are VERY BIG CATS!!!!! Even bigger than Kismet!!! And you know what else? Cheetahs eat vishus deers! They do!!! Vishus gazelle deers!! I will tell you all about vishus gazelle-deers in my new, expanded Vishus Deers of the World booklet, when I write it. And I'm thinking of writing a Vishus Deer Attack Survival Guide for Cats, too, and I will study how these cheetahs kill the vishus gazelle-deers and we can learn their techniques!

And the third bit of news is that my peoples said they went away to pretend to be Vikings, but they gave away the real reason for their trip when they came home!! They were hunting our Chritmas Presents!!!!!! The Big One said it! He came in the door with lots of bags and said "You monsters had better appreciate us because we went away all weekend and spent all our money on you two instead of ourselves!" And Grumpybutt says he swears he smells catnip! And he'd know, 'cause he's the Drug-Sniffer Kitty!

And the fourth bit of news is that KC's mom says anyone who wants to use the little graphic she made for my Vishus-Deer of the North Pamphlet can, 'cause she made it just for me!!! Purrrrrrs, KC's mom! You're the bestest!!!

And Sanjee, maybe you should put an classified ad on the Blogosphere about you're seeking a fully-qualified ginger cat for a new position as starter-upper of Ginger Cat Wednesday. I think we know several cats who are probably qualified for the job.

Also, Welcome Moose, Nala, Turtle, Chase, Millie, and Pumpkin! I'll add your links to my list in the morning before I do my blog rounds.

Posted by Jack, Persephone, Tenzing and Lancelot at 1:47 AM

Now that wuz some news! Just like in da news paper that my Momma reads. Gud stuff! Fannks fur sharing. Furry nice pixchur of yu too!

I can nefer believe it when mommy and daddy leave me. How can they resist my little face???
I am so glad they are safe after seeing those vishus moose deer. Scary stuff out there!
I love your face when you're guarding your hocky pucks. That is fabulous.

Wow, that was lots of news. Mom stole our Skeexiz magnet for the fridge also.

Neet presunts from Skeezix. I'm glad yor beans got home ok, and that they bot lots of presents fur yu!

Wow, it looks like you got lots of cool stuff in that box!

Wow, Jack, lots of interesting news! Especially the part about big Cats eating vishus deers, and the cool stuff from Skeezix, and about you getting extra treats because you missed a day.

Please tell your OTW that my Mom gets those good boxes at Aldi's grocery stores. I don't know if they're all over the country but she goes there a lot and always brings home her stuff in those neat boxes instead of bags.

our Lady stole all our FOS magnets an pins too. then she put 'em up ware we can't reach 'em. we think she's jellus cause she wants ta be a furrend of Skeezix too.

Wow - that was lots of good news Jack! We can't wait for our FOS stuff too - we'll have to try out the hockey puck style of playing with the buttons. Isn't nice when the beans come home - puuurrrs!

We forgot to tell you - our Mommakitty showed us some pictures of the vishus deer her family caught! They hang their point heads on the wall to warn other deer! Come visit and see . . .

Wow, so much news. We always enjoy hearing what's happening in the far north.

What a gorgeous black panther kitty you are!

It's nice to meet you.

Zeus is my reason for the season!

It is ferry nice to meetz you. Meowmize just found your bloggie after seeing it on Zeus's bloggie. We will have to come back and visitz you again.- Sia

Zeus Is My Reason For The Season

Isnt it sooooo much fun getting packages in the mail? :)

Zeus is the reason for the season!!

I'm sorry to be so late viziting yer blog becuz I'm behind after my Thanksgiving rode trip ... maybe on owr next rode trip we can take the Eyes 5 to Canada!!

I'm glad yoo finely got yer FOS buttuns. I need to make yoo a sertifikit or sumthing that sez yer the prezidint of the Canadian Chapter!