Sigh. Again with the leaving.

They're going away again. For TWO WHOLE DAYS!!!!!

At least I got lots of laps lately as my OTW sewed up a storm. 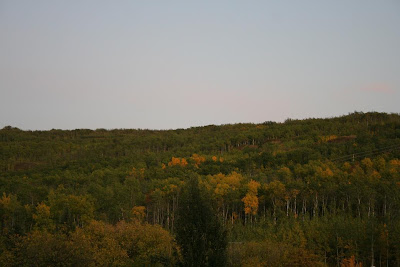 And this again, too. Cold. I need to move somewhere warm. I hear Australia's heading into spring.... 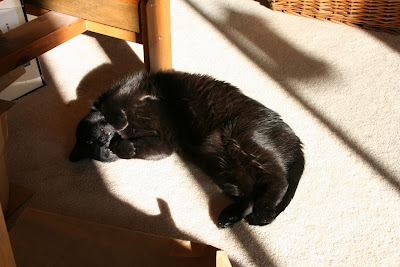 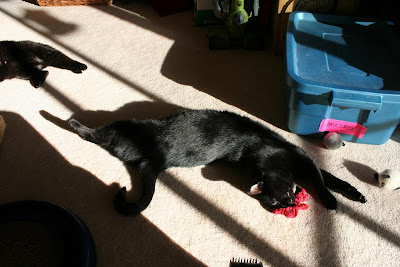 At least there's sunspots to wallow in.

If the OTW remembers to leave the blinds open. 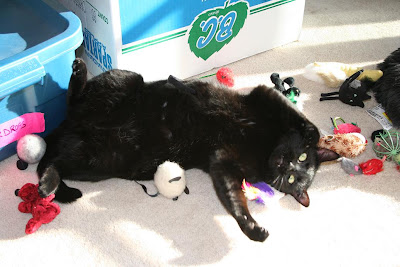 And she dumped out our treasure chest of catnip playthings and mousies, and hasn't cleaned them up. Persephone's enjoying whapping them all under the sofa one by one!! 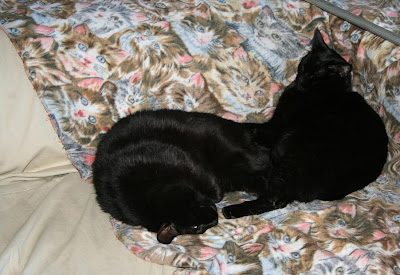 I think we're gonna head over to Praline's party and nap!

Maybe I can come visit you, KC?

Persephone: Batman! Save me!! Mommy's abandoning me again! Can I come snuggle with you and cuddle your mommy?

Happy Birthday Praline!
Posted by Jack, Persephone, Tenzing and Lancelot at 5:35 AM 216 comments:

In honour of Meow Like a Pirate Day, I tried t' eat me wench's eye-ball this mornin'! But she shrieked and turned away, so I tried t' smother her by nappin' on her face, but it didn't work neither! 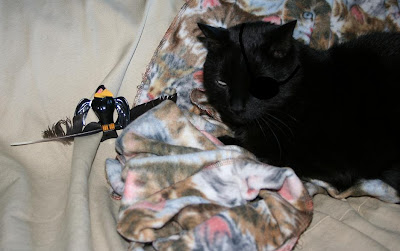 What? Quoth, me RAVEN' mad parrot, CROWed that eye-balls be tasty treats! 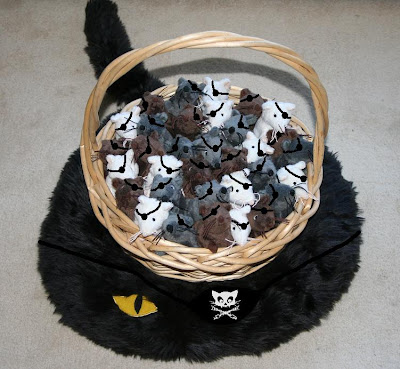 Since that didn't work, we be havin' fun with a lot o' scurvy piRATical sorts!!! 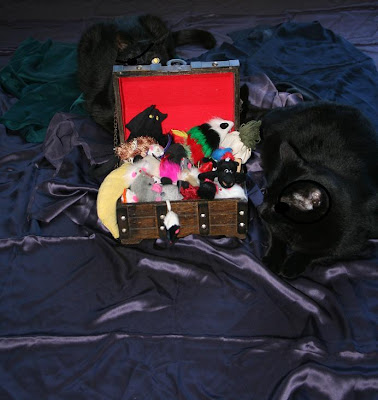 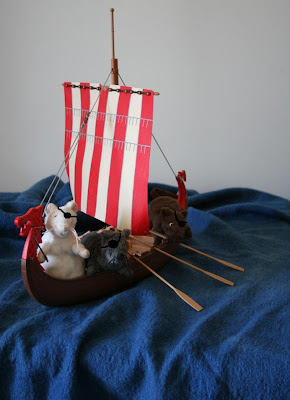 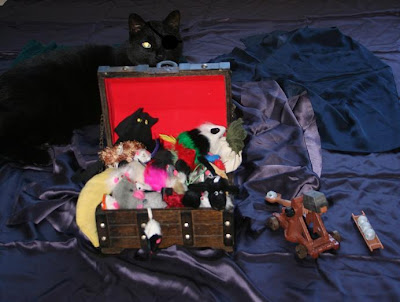 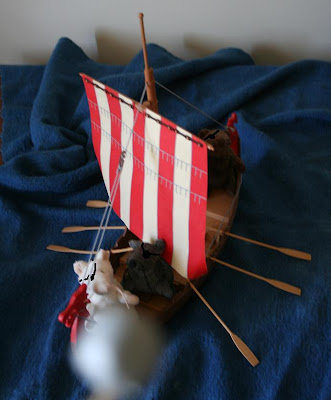 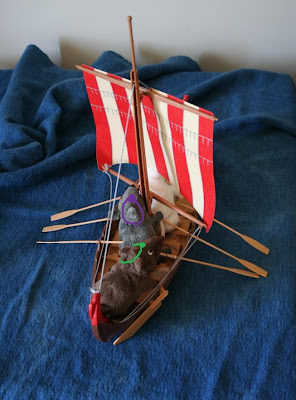 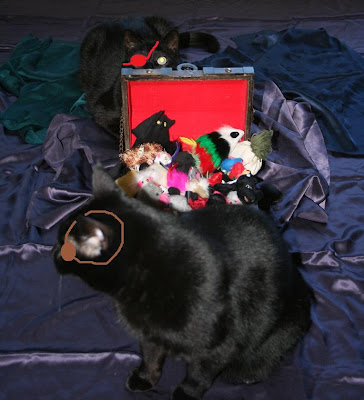 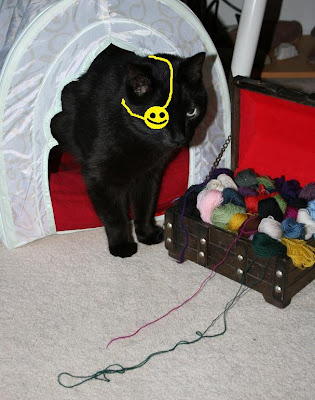 And the party continues! 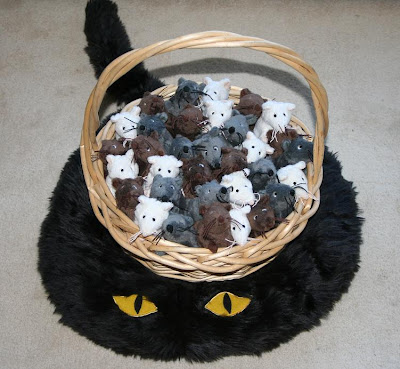 The Minions want to know where they are going, and what are they doing in this hand-basket! 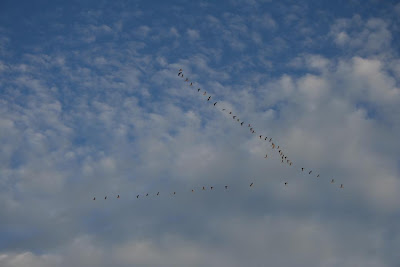 It's migrating season. Come on up and see the geese off from their summer home in my yard to their winter homes in yours! 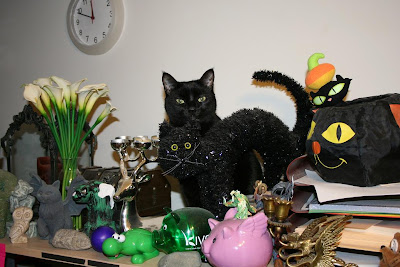 PersePHONY is hiding in the black cats*, ready to tip over the nip container (under the sparkly cat).

*Seriously! The OTW once looked ALL OVER for Persephone, finally gave up and sat down, glanced up, and there Persephone was, the whole time!**

**The OTW says to tell all the mommies and daddies not to worry, the lilies are fake.

So far the names we have are: 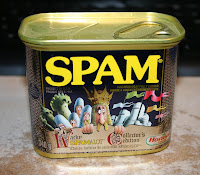 The OTW says "Ha, ha, very funny. You cats are just a riot. We're not naming them after food."

Though I did hear her say to the Big One that naming them all after cheeses she's eaten would be funny. But then she said "German Butter", "Farmer's" and "Cottage" were just silly names.

She says "try again". And also that she'd love to know why a name was suggested, if you want to tell us. Except for the food names. She says she KNOWS why you'd name them after foods, and muttered something about "furry little walking stomachs"! (P.S. she went out and got a stack more of tuna and chicken and turkey and ham, and bags and bags of Temptations. And litter.)

So, any more names?
Posted by Jack, Persephone, Tenzing and Lancelot at 10:08 PM 29 comments:

Happy Birthday to ME!!!! 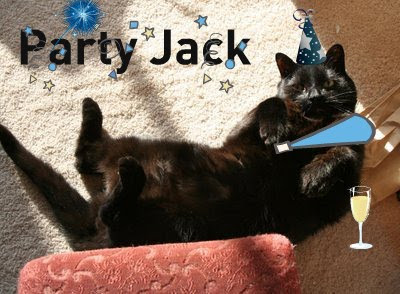 Today is my Birthday!!!! I'm Lucky Thirteen today! (Thank you for the great picture, KC!!!!)

And no claw-clipping this year!!! (the OTW did it last week, my claws don't grow that fast anymore).

The OTW says no toys this year. She says I already have too many. She says I never play with most of them anyway. She says she can't buy me anything, 'cause I never like what she gets me, and I mostly play with "trash" and my old toys and stuff she makes or gets for Persephone.

I was thinking my OTW sucks as a human, but then she said she got me something better.... 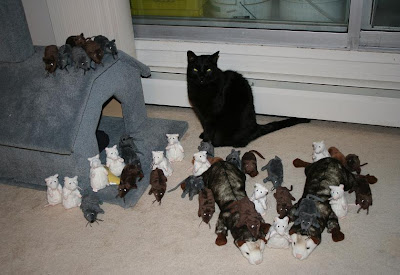 (Plus Rock, Paper and Scissors, who you met before-Rock and Scissors are mounted on the OTW's trusty Info-Ferrets, and Paper's leading the charge with his needle-sword--you can see them better if you biggify the picture).

My human is the coolest humans EVAR!!!!!!

Now I just have one little problem. I gotta come up with 30 names for them!

Hey everycat, I say it's time for a Birthday/Naming Party!!!! Come on over! We can party until the end of the weekend, and you can all help me name the Ratty Minions!! Single names are good, names in groups of three are also nice! Actually, I think my lazy human hasn't named the ferrets either.

We got lots of kibble (the GOOD stuff!), cans and cans and cans of tuna, and turkey and chicken and gooshy foods and spam (Spam? Really? We have SPAM, OTW?!?!?), and Temptations! And we can drive my OTW around the bend!

My OTW says I have to tell you that we are NOT under any circumstances going to name any of the rats Breakfast, Lunch and Dinner.

And the spam's not hers.
Posted by Jack, Persephone, Tenzing and Lancelot at 7:31 AM 30 comments:

A Day Without Cats on the Internet

Apparently today is supposed to be a Day Without Cats on the Internets. 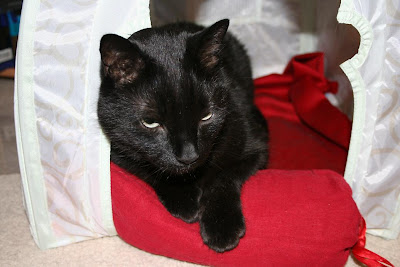 As my OTW says I don't THINK so! 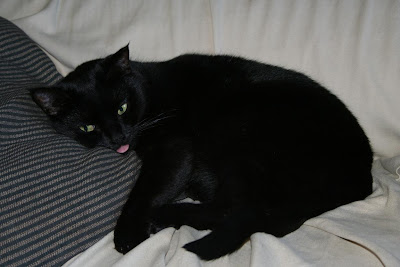 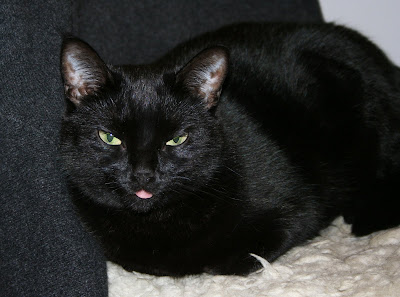