I'm back and I'm sorry to have been gone so long. My OTW's competition went well. She didn't win, but the person who did said she was surprised and thought my OTW was going to. My OTW did tie for a prize for Populace choice, which she says means she and another person got the most votes for favourite from the people there.

I've been very busy, training kittens, though Persepone really doesn't need much more training. In fact, she's been helping me train Squeak to be a civilised cat! Squeak's doing great and is ready to go home to her humans in a day or so! She's a fierce hunter, too!

And it's a good thing. A week ago the Big One came home and said he saw a vishus deer in the street IN FRONT OF OUR APARTMENT!!!!!! Squeak's people are moving into the apartment beside us!

Though I'm looking forward to getting my spot on the bed between my OTW's legs back. Squeak keeps stealing it, and if we fight she throws us all off the bed for waking her up! Like its MY fault!!

I've also been busy on a new information pamphlet on vishus deer and their infiltration of the entertainment business!

I fear, however, I am becoming even more convinced that my OTW has a vishus deer ghostie in her brains, because she goes away for this contest, and she travels through a place called "Moose Row" and stopped in a place called "Red Deer" and brought home this! Coincidence? Or was she really at a Vishus Deer Convention learning new tricks to lure tender juicy young kitties for her vishus deer masters? 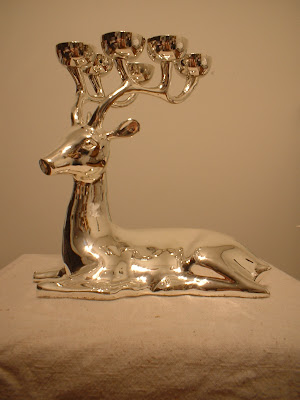 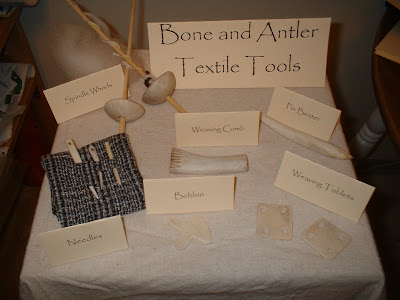 On the other hand, not all humans are fooled by this! When the human vikings judged these tools, they didn't think they were any good!

Or.....maybe they just didn't think they were good enough to skewer us cats!

It gets worse! While she was 'working' on her tools she kept forgetting to fill our kibble bowls or feed us gooshy food. She even 'forgot' to tell the Big One we were out of kibble and we had to knock over the bucket and leave him a note in his shoe! Was she trying to starve us? Not so much we lose the meat off our bones (and Persephone's got LOTS now!), but enough to weaken us?

And I got a really nice Valentine's Day card from Skeezix (Thanks Skeez!!!) and she's put it on the computer where she can see it whenever she sits typing! She said he looks delicious!!! Does that mean she thinks he looks cute? Or that she wants to trick me into getting him to visit so she can catch him?

And the day after she came home, she clipped both the kittens' claws!!!! And Grumpybutt's! She hasn't gotten me yet, but it's only a matter of time! Is it that she's tired of getting cat scratches that get all red and yucky? Or is she trying to take away our defences?

Was all this 'work' that kept me off the computer really a competition? Or was it about a Vishus Deer convention? And she just didn't want me to see what she was up to? And to keep me from my network of support? And to keep me from informing the kitty population about this threat?

I will maintain my vigilence Everycat! If she does have a vishus deer ghostie in her brain, I won't let her get me or the kittens! And she won't stop me from publishing the truth about the Vishus Deer Conspiracy!

PS. I missed you all too! Especially you, KC! Purrrrrrrrrrs!
Posted by Jack, Persephone, Tenzing and Lancelot at 1:37 AM 8 comments:

FINALLY!! My OTW has let me have the computer for a little bit!

So for Big Man-Cat Monday I have something special to say.

Big Man Vikings weren't just supposed to be great warriors and fierce hunters. They were supposed to be law-abiding citizens, generous and loyal to their friends and family, and take care of those who were their responsibility. By doing all this, they were considered good men and valued parts of the community.

Big Man Vikings were also supposed to be very proud of their appearance and their deeds, and be able to write poetry.

As a Big Man-Cat Viking, I AM a fierce hunter, and mighty warrior, I abide by the laws of this house (I'm not the trouble-maker who keeps kicking to death toilet-paper rolls and I always come in when I'm called), I love my OTW best of all and train and groom the kittens well. I also have beautiful furs and catch many bugs and mousie-toys!

So that only leaves poetry.

So here is my poem, I hope it's good. It's the first viking poetry I ever wrote! (Oh, and my OTW helped, 'cause she's a noted skald among her viking friends)

Well-known, this girl-cat’s worth,
Her word-fame, far spoken
A golden-pawed goddess
Is she who gives me joy.

Hawk-keen out of heaven
She hunts, Bug-Valkyrie
Tortie of mousie-toys
She has taken my heart 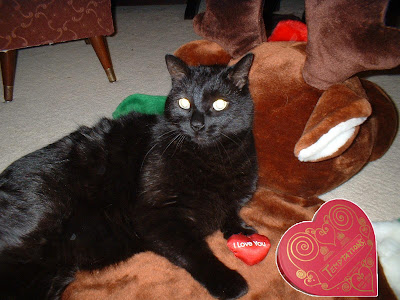 KC, will you be my Valentine? And go to the Valentine Party with me? I got you a box of Temptations and this heart toy that's really fun to bat around (I tested it myself!). I was going to get you a cat-grass corsage, but my OTW killed all the grass again.
Posted by Jack, Persephone, Tenzing and Lancelot at 5:52 AM 32 comments: 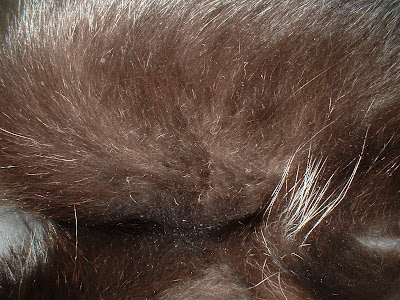 I have a spot too! It's just like Jack's spot and it's even on my belly about where his is, but mine's BIGGER!!!

Also, I noticed a lot of young girl-kitties were getting their ladiegardenectomy lately and were commenting on their shaved tummies and hoping the furs would grow back. Well, I got mine done Dec 14. 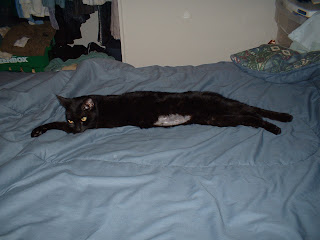 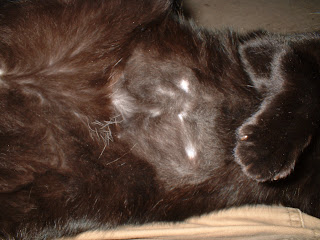 This was my belly Jan 19, a month later. 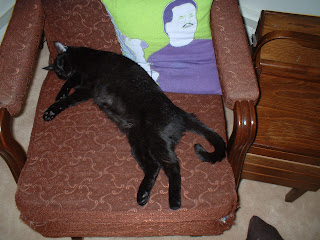 And this is my belly Thursday!

So don't worry all you girl-cats, it grows back just fine! I promise!
Posted by Jack, Persephone, Tenzing and Lancelot at 4:03 AM 8 comments:

Sophia announced a few days ago that today would be Wear Red Day to raise awareness of Woman’s Heart Disease. My OTW says she's not planning on leaving the house tomorrow, and we don't go out in winter, so she's gonna put us all in red on my blog instead. (Well, except Grumpybutt, who was hiding in the bedroom burgling snuggles from his Awesome Man, The Big One.)

All you kitties out there remind your humans if their heart feels a little funny, they need to see a vet! And tell them to go to the Wear Red link and see what they should watch out for! We need them to feed us and stuff! 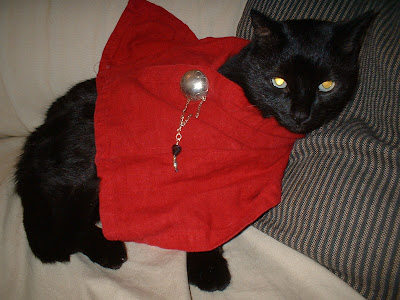 I made my OTW promise never to dress me up in silly costumes again, but this red (my favourite!) viking cloak is pretty cool, so I'll make an exception this time. Besides, look at the really cool navigation stone pendant KC gave me! My OTW put it on a chain from my pin so I can check where I am when I'm hunting vishus deers! Thank you, KC!

You ARE going to go to the vet's and have your heart checked if it acts funny, right OTW? 'Cause you know your Dad has a bad heart, and I don't want you to catch it, 'cause the Big One doesn't rub my belly right, and he can't scritch my spine properly! 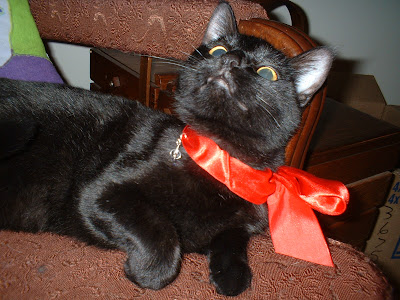 Persephone isn't so good at posing yet even though every time she hears the camera turn on she thinks it's for her and comes running and hogging the camera, so my OTW had to attract her attention with a mousie (a RED one!) to get her to stop burrowing her head under her chin trying to figure out what was on her neck! But it's a really pretty red bow with her charm from KC on it! 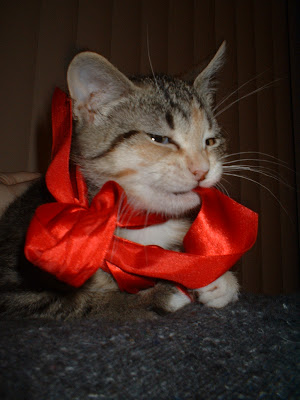 I don't think Squeak understood WHAT was going on (that kitten's got NO BRAINS!!!), but she knew there was ribbon and ribbon is for biting, so she did! 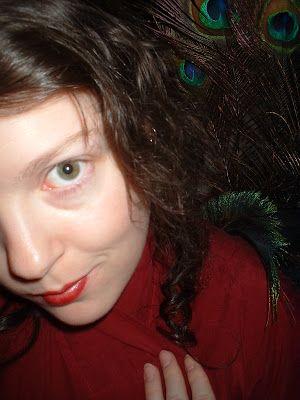 My OTW says this is rare photographic evidence that she exists! And even rarer evidence that she actually DOES own make-up! Though she thinks it might be YEARS since she wore lipstick!
Posted by Jack, Persephone, Tenzing and Lancelot at 2:37 AM 14 comments: