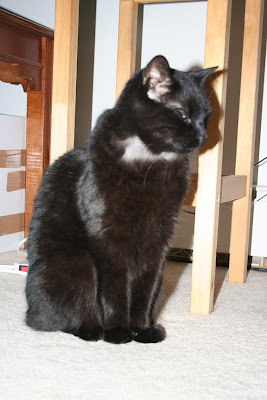 Well, this is just great. I'm eating kibbles again. I'm drinking. I'm peeing. I'm PLAYING! Right in FRONT of her! I'm feeling better, and she STILL took me to the V-E-T!

And then they gave me a bad furcut! 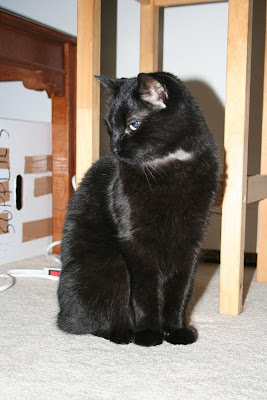 Now I'm going to look all dorky in my Christmas photos, while I open all the presents my OTW had BETTER BE GIVING ME!!!! 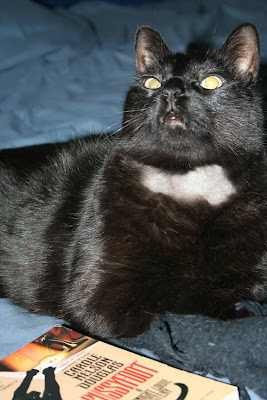 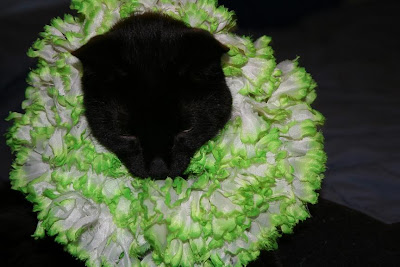 Maybe I can hide it by wearing this lei.

In good news...I'm feeling better! Wow, catblogosphere purrs work FAST! A few hours after Persephone posted asking for purrs I got up and ate some more gooshy foods, and then some kibbles, then hopped up on the desk for some lovins, and then I saw Scissors and decided to invite him to play, and we played Whack-A-Rat under the footstool for a while. And later I peed.

And this morning when my OTW got up I hopped up on the counter while she combed her headfurs, and demanded she do me next, and after her shower, I drank water from the bathtub edge.

And then she scooped me up and shoved me in a PTU and took me out in the COLD anyway! Seriously! It was FREEZING OUT THERE, WOMAN!!!! The car said it was -24!!! (that's -11 to you Americats). I nearly froze my tail off in the squillion miles walk to the car!

And what did Dr Tara say? That I'm FINE! She can't find anything wrong with me physically. That's what I said to my OTW! And I didn't need to steal my bloods and my pees and stick things WHERE THEY DON'T BELONG, and give myself a bad furcut, to say it!

My OTW and Dr Tara think maybe it was just the infection after all, and I was just feeling a little under the weather as it cleared up, since she didn't find any evidence of a full bladder or blockage or fever or anything.

Dr Tara sent my bloods and pees away to a lab, who I guess will sniff it over, though what a D-O-G would know about it, I don't know. But it'll be sniffing it until Saturday, when Dr Tara will call and let my OTW know what it found. 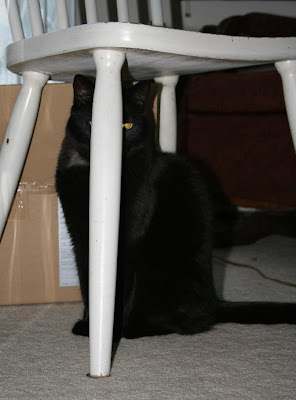 I'm going to hide here under the chair.

Don't look at me, OTW. And stop taking my picture, I look stupid.
Posted by Jack, Persephone, Tenzing and Lancelot at 1:00 AM 37 comments:

Sunday was my 2nd Gotcha-versary!!! Mommy didn't forget it, she's just been busy with a super-secret-special project, but I got lots of extra pets and scritches and treats!

I didn't get any presents, 'cause mommy says Christmas is soon, and I get presents on Christmas and my birthday same as Jack, who doesn't have a gotcha-versary, 'cause he was borned under mommy's couch and grew up in her closet and he always had her. 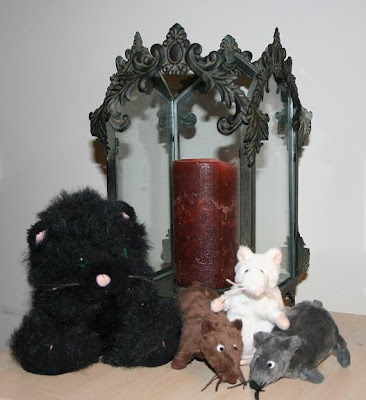 I did get some new friends a couple weeks ago, though! Meet Rock, Paper and Scissors, sitting with Lily for a group photo! 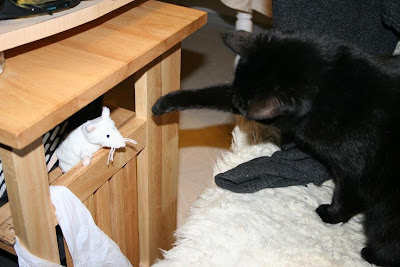 Rock, Paper and Scissors are FUN! Here I am playing Whack-a-Rat with Paper! 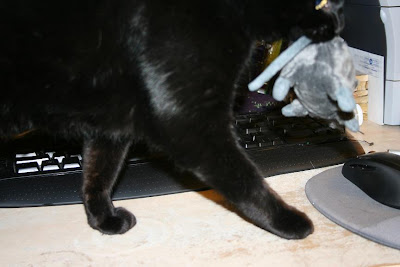 And here's Scissors and me going for a 'walk'! 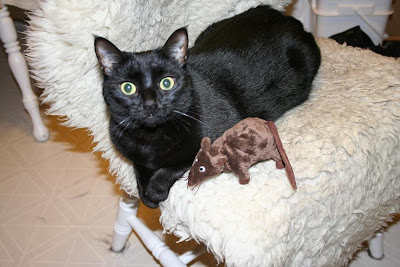 What mommy? What is Rock doing down here on the chair with me? Nothing! We're just having a 'chat'!

Mommy says Rock Paper and Scissors came from Eye-Key-Ahhhh. She thinks other cats might really like some of their brothers and sisters, and the Gotcha-fees are almost no moneys at all! I guess they REALLY want to find homes for all the little ratties! 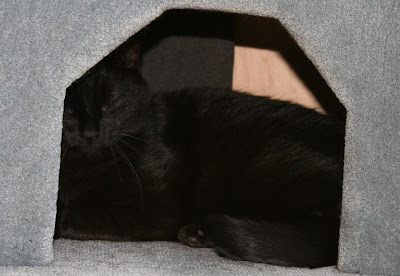 But there's some bad news. I'm hoping you all can spare a few purrs for my brother Jack. He's not feeling very well, and mommy's taking him back to the V-E-T tomorrow.

He was doing better after the yucky pills, but it looks like the infection might not have been gone, just hiding. All he wants to do is nap ALL the time, and he won't eat his kibbles, or drink much water or pee much. Mommy's giving us extra gooshy foods and extra water in it for him and he'll eat that, at least. Mommy says he might have a stone in his tummy, but I don't think so. Jack is very smart and wouldn't eat rocks.

He's feeling a little better right now and playing with Scissors a bit, and ate a few kibbles, but mommy's gonna take him to Dr Tara anyway.
Posted by Jack, Persephone, Tenzing and Lancelot at 5:58 PM 26 comments: 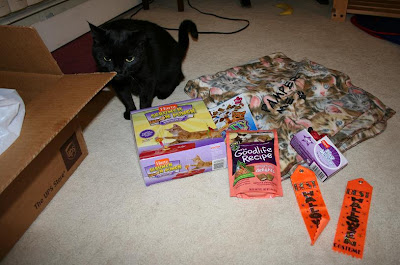 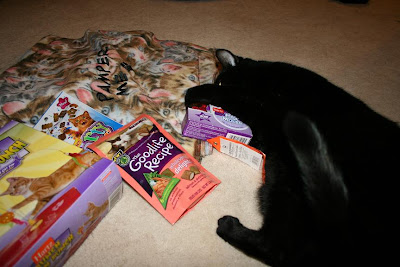 I think this is the one with the nip!!! 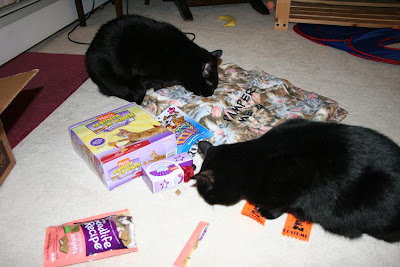 YUM!!!! Treats! Even Jack likes them and they're FISHES flavoured!!! 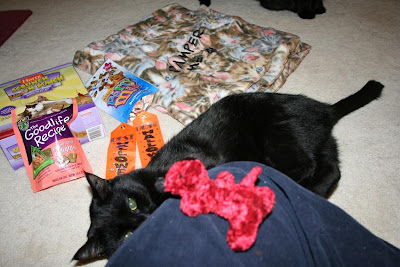 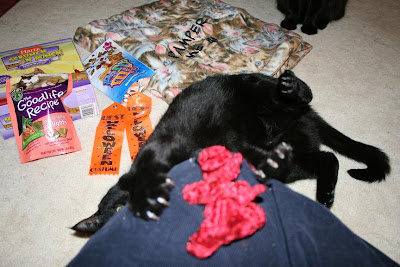 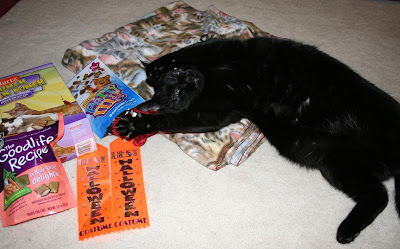 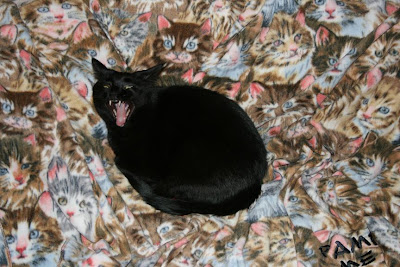 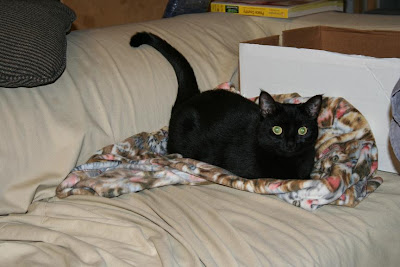 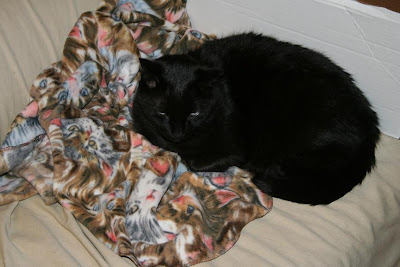 Jack likes it too! 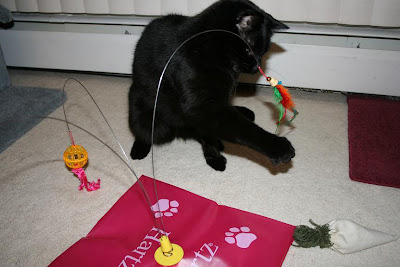 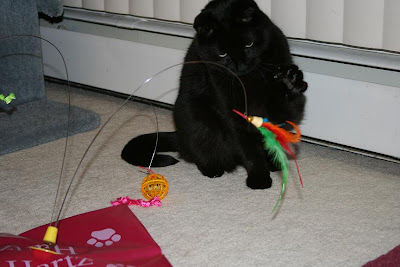 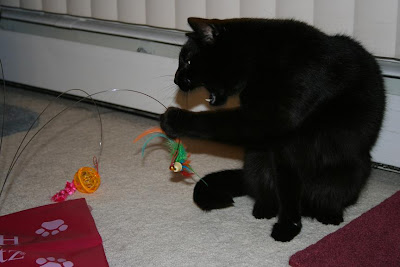 We won these in the Halloween Floof Costume Contest! Thank you Stryder, Scotchy and Sugar and your Meowmy!


PS. from Jack:
I took my last pill yesterday. I was mostly good, 'cause actually, all the attention was great, and I've even got her running to pay attention to me at the least little mow, but I was getting a bit uncomfortable and kinda thirsty. I DID spit out the pills as many times as I could when she gave them to me, but that's just the principle of the thing, really. I threw them up twice, too, but that wasn't such a bad thing, 'cause once that hairball that's been bothering me for a while came out too! So I guess it was ok.

But I'm NEVER TAKING THOSE PILLS AGAIN!!! They upset my tummy.

PPS. KC I would love it if you came over and snuggled. I think I'm feeling weak and...stuff, again. PURRRRRRRRRRRR!

PPPS from the OTW:
He's peeing again, not quite as much as usual. I'm going to give him the weekend to let his tummy settle and see if he gets better. If not, I may talk to them about testing again or trying something different, in case it's a stone. He had a small one a few years ago, and the first test came back the same as this time; infection, no crystals.

Also, he was taking Zeniquin, which he's never had before, and it really did seem to upset his stomach a bit. He NEVER throws up, even hairballs. Every time I gave them to him, he'd start getting restless about half an hour after he took it, and not be able to settle for long for hours after. And was actually cranky about TUMMYRUBS!!!!! Anyone else have this trouble with this stuff, that they know of? I'm going to talk to the vet techs on Monday about it so I have a note on his file not to give it to him again, but I'm curious about other cat's experience.
Posted by Jack, Persephone, Tenzing and Lancelot at 1:42 AM 19 comments: