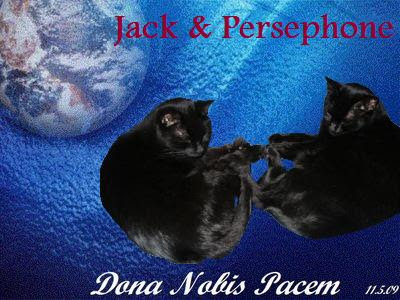 We're a little late but here we are!

Peace to all!
Posted by Jack, Persephone, Tenzing and Lancelot at 6:33 PM 17 comments:

Something very exciting happened this year! WE GOT A TRICK-OR-TREATER!!!!!

This is very exciting because we have never had a trick-or-treater here. The first year, the OTW made me a costume (a Viking!), took pictures of me in it, and tried it on Whisper too (no luck there). She decorated the house, put on a costume, and had a bowl of candy all ready to go, and not one trick-or-treater came to the door.

The second year she kinda faked costumes for me and Persephone (Persephone's frootbat wings were really on a wire, and my costume of Dr Doom only worked because she put a world beside me); she decorated a little, skipped wearing a costume and wore black, and had a box of candy in the cupboard just in case, and not one trick-or-treater came to the door.

The third year, she photo-shopped most of our costumes (Persephone really was wearing Karl-ish sunglasses, and I had on a real mask, but the rest... though the Hendrix/Bendrix bandanas were COOOOOL!), stuck a couple of Halloween black cat decorations where she could see them, wore whatever she wanted, and didn't bother buying candy, and not one trick-or-treater came to the door.

This year...we did not have to get dressed up at all. Or even have our pictures changed. She did not decorate the house. She wore grey. The Big One did bring home candy because it was already on sale, and it's the only kind of Halloween chocolate bars she can have because they don't put peanuts in any of them, and ONE trick-or-treater came to the door! (Though she had to rip open the box and dump the candy in a bowl to give him some!)

I think the trick-or-treater came because she didn't make us dress up!

We ignored the whole thing and went to Mickey and Mrs. Peach's wedding and when we got home we decided we wanted to dress up and go trick-or-treating ourselves 'cause it was still early out west when it was night at the wedding. But then we found out we had both dressed up as Basement Cat and were so mortified at wearing the same costume we had to take a long nap! 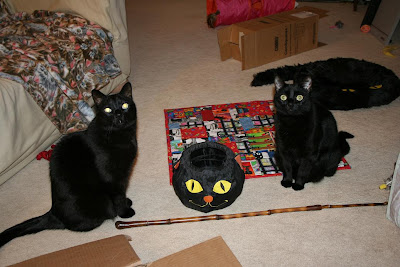 We had a Treat-bag ready and everything!

We did see something really scary near dawn though... 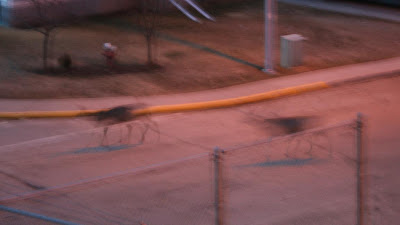 Vishus Ghost Deers!!!
Posted by Jack, Persephone, Tenzing and Lancelot at 12:39 AM 9 comments: