Jake and Bathsheba asked me a while ago just how far north I am, so I thought I'd show you a couple maps that my OTW helped me mark. The first one is a map of Canada, in case anycat doesn't know where Alberta is, it's the second province on the left on the bottom row. On this map I live about where the red dot over the "Alb" is. 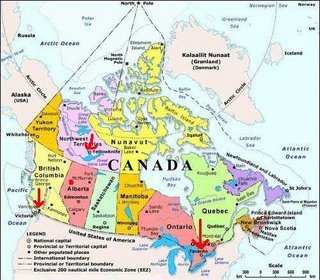 This second map is just Alberta. I live where the red arrow points. The "X" Is where Jasper is (the place, not the cat) That's where Jake and Bathsheba's Mom said she went. The dot with the "E" is Edmonton, and the dot with the "C" is Calgary. 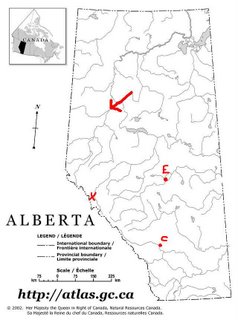 On the top map there are three more arrows. The one on the left is Vancouver, where I used to live, and where I first saw vishus deer hunting me from across the road. The arrow on the right is Toronto where I was born.

Jake and Bathsheba, I was born in 1996, my OTW says, but your mom wouldn't have met me, 'cause I was born in an apartment way way way up in the sky in Toronto. We were so high the birds flew below us!!!!!! Their nests were so far down I couldn't see them. Except some of them. There was a whole big family of birds living on our balcony. The OTW called it a pigeon slum. There were lots and lots of them! More than there were cats, and I had 4 litter-brothers and a mom and two big brothers, and a big grumpy white cat I used to bug a lot, and a shy girl cat I hardly ever saw, and the climbing girl-cat, and the girl-cat who walked funny!

The pigeons were fun! Sometimes we would all line up along the window and watch fev-ver tv. My OTW says sometimes we practiced synchronized tail lashing and sometimes we would take turns talking to the birds, but they mostly pretended we weren't there. We weren't allowed out to play with them though.

My OTW went even further north than where we live. This summer the Big One's Mom came to visit and she took the OTW all the way up to where the top arrow is! She saw bears, and bison (which are like giant cows with lion's manes) and lots of vishus deer, but she said she didn't see any vishus reindeer because they're even further north than she went!!!

Posted by Jack, Persephone, Tenzing and Lancelot at 2:38 AM

Fanks for showing us where you live. That is pury far north. My mommy has a furend who lives in Montana and she send pikshures of her visits to Canada (further south than you are) and they are soooooooo purty. Can you posts some pikshurs of your area too?

did ya get tha piksures of tha vishus deer killed just a few miles away from ME? no tellin how long it had been huntin tender little Texas kitties...:: shudder ::. i's glad tha ally-gator gotted it. but it tooks a huge ally-gator ta kills it. ekk.

Thank you, Jack, for pointing this out to us. I had you listed as a "US" cat, but have now moved you to the "International" links section so you can be with our other Canadian friends.

Our Meowmie says she has been to Toronto, but she did not see you.
Wow, it must be very cold up there. We hope you have lost of blankies.

oooh - that's furry far up on the map! our Lady went ta Toronto one time, but it wuz 3AM an rite after a horry-bull blizzerd an most stuff wuz closed so she an her furrend had brekfist at a coffee shop wif a buncha really nice gay guys an then drove home ta New York. our teenagers is hooked on sum TV show called DeGrassi an so they wants ta go ta Canada. PLUS, an mostest importantest of all, our Lady's ALL TIME FAVE-RIT group effur, the Barenaked Ladies, is frum Canada an then so is Nickelback an Default an a buncha offur people she likes an so 'parently Canada is furry pop-you-lure wif our famlee. next time the Lady drives up there at 3AM fur no apparent reason she sez she'll stop by an say hi ta you.

Hey now, Jack! I'm a black cat too and it's a pleasure to know ya. I'm from Pennsylvania although I was born next to a railroad track in New Jersey. I don't know much about pigeons but we do have dumb mourning doves here.

Wow, Jack! Thanks for setting us straight on where you live. That is very far north, and it must be very cold there this time of year. I bet you can see the northern lights; that would be way cool. Mom went to Alaska in 1993 (before I was even born), and went as far north as Denali National Park, but since it was only August and it didn't get dark till around 11 p.m., she never got to see those famous northern lights.

Jack, it was so neat chatting with you, and learning about where you live! Stay warm, and be nice to Persephone.
Tara