Vishus Deer of the North- An Educational Pamphlet

As promised, my "Vishus Deer of the North" educational pamphlet.

Warning! Many of the pictures are graphic and may frighten young kitties. But education is vital to saving their lives!

There are several types of Vishus Deer living in the North.

The most common type of vishus deer where I live are Mule Deer. We also have White-Tailed Deer, which look mostly the same to me. 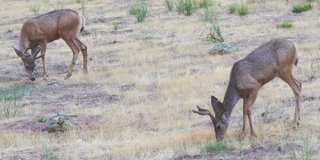 Mule Deer live in most habitats in their range. This means they're sneaky and adaptable. And everywhere! They can live in mountains, deserts, forests, and grasslands, even your neighbourhood! Mostly they live in western North America.

These are a smaller type of deer and feed mostly on young, juicy cats, as they aren't big enough to catch and digest the older, tougher ones. 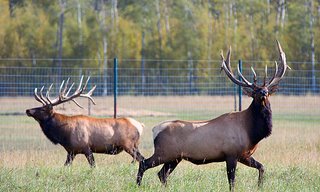 As you can see from the picture, they have many many sharp points on their horns. These vishus deer are clearly large enough that even big strong older cats are at risk. And they really do live everywhere! All over North America! They live mostly in the mountains, grasslands and forests. Luckily for cats, they don't come to cities and towns so much. Though there was that one video of a dog who was friends with one of these vishus deer. Country kitties beware.

What's really crazy is up north here; some farmers HERD these vishus deer! Just like they were COWS! My Opposable Thumb Wench, who was most unfortunately born human, says that clearly, living far north, the cold gets into your brain and makes you crazy!

The third type of vishus deer is the caribou, also known as reindeer. 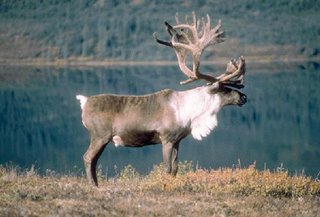 You will notice in the picture that the points of these vishus deer's horns are not sharp. DO NOT let this fool you, Kitties! If you look again you will see that while they are not sharp, reindeer horns are shaped in a way that makes it easy for them to catch a cat and tangle them all up. What's even worse is that these cat-catching horns are grown by both boy-reindeer, AND girl-reindeer!!!

Centuries ago, the neighbours of the brave viking humans, the Sami, herded these vishus deer. The viking humans thought the Sami were crazy. I'm not surprised. The Sami lived even further north than the viking humans did. I've heard that some of the Sami still herd vishus reindeer, but I never believed anyone would do such a crazy thing, until I moved up north here, and saw what crazy things humans living really far north do.

Most of you kitties reading this, can take heart however, as these vishus reindeer only live way up north. Even further north than me! Like up at the North Pole where Santa lives. There used to be southern vishus reindeer down here in the Boreal forest region where I live, but they've mostly died out. Maybe there were brave vikings here who hunted them all, before going crazy and herding vishus elk-deers.

The last type of vishus deer is the Moose. These guys are HUGE!!!! Like, bigger than your people's machines that take you to the V-E-T! Taller than your man-people!!! 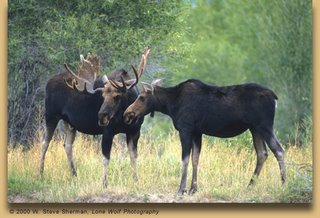 These are the worst type of vishus deer! They have horns that skewer cats AND scoop them up!!!

Vishus moose-deer have very long legs. They run kind of funny compared to the graceful, deadly run of the normaller types of vishus deer, but they're very very fast! Especially when hunting juicy young kitties! (They are really really big, and they can hunt any kind of kitties with ease, but juicy young cats are their favourite.) Even the young mooses are dangerous and huge! 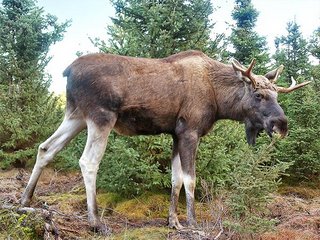 These vishus moose-deers are mostly a concern to cats living in Canada and New England and the Rocky Mountains. They mostly like forests because big trees are the only things big enough for them to hide behind while they lurk in wait for juicy cats, or the occasional stray human (especially the young juicy humans). 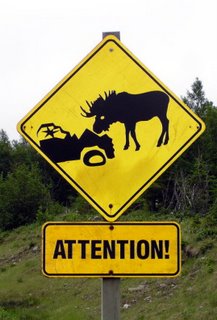 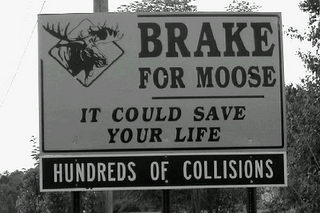 Remember everycat, these are very dangerous creatures, armed with horns. If you see one DO NOT APPROACH IT! Tell your human, or post a warning to the Frends of Skeezix "Vishus Deer Nayburhood Watch Groop" on Catster.

Thank you, and stay safe!

Jack, I am just compleetly overwelmd by the werk yoo put into this projekt! In fakt, I desided to make yoo the prezident of the Canadian chapter of FOS! Yoo are amazing and brave and strong! I saloot yoo!

wow I hopes they don't come to my yard. They would have to jump the fence to get in.

THEY CAN JUMP THE FENCES, DERBY!!! Win they do, yoo better run for yer life (not nessusary if yoo are eqwipt with Mao & Rocky's Vishus Deer Repelunt.)

Like Rocky says, they do jump fences. The white-tailed kind have been in our yard a few times, but just nibbled a few plants and jumped back out. Our dad would never let vishus deer hurt us!

Mom's plant lady friends also hate the vishus deer because, in addition to juicy cats, deer eat all sorts of pretty flowers like hostas and azaleas. Don't be tricked by innocent Bambis.

...but tha piksures be so skeery, i's glads tha vishus deer don't comes down ta tha gulf coast of Texas...they don't do they? not even fur ba-ka-shun?

We cannot thank yoo enuff fur providing such valuabul infurmashun. Even though we are indoor cats we need to know the vareus types of vishus deer to watch owt for! Yoo are such a grate friend and a vary vary smart kitty. Thank yoo so much!!

Wow! The President? I'm so honoured!!! I don't even know what to say!

I'm just proud to be friends with such a famous internet cat who is also a great feline-thropist.

KC, sweetheart, I don't think you have to worry much about vishus moose or reindeer, but I'm sorry, I think they do have some deer in Texas. I'm not sure about elk, but they're mostly just in the country, anyway.

You just keep your eyes open, and if you see any vishus deer, you let me know. I won't let them hurt you.

Hi Jack, KC just published a note and link about your terrific research and "cat public service" on the Cat Blogosphere.

Oh my gosh!!! Thank you for the valuable information! My big brother Chase said he's actually SEEN a Moose-Deer!!!!! There was one that lived in his woods when Mewomy & the Chip Man lived in Massachusetts. SCARY!

that duz it. we is neffur going outside again. no way.
ya no whut? our Lady gots an unk-el who she duzzn't speek to anymore on account of he's crazee, an he lives in the country in New York an he gots a duzzen vishus deer heads stuffed an hanging on his walls in his house!

Jack- u have provided a furry impurrtent service fur all kitties. This infurmation is more reason fur all us purr-cats to be indoor kitties, where we are safe from vishus deer!

oooo Jack, you did a fantastic job with this project. I knew teh vishus deer were dangerous, but had no idea how to tell them apart. Thanks you so much. Did you haf bad dreams when you seen all those pikshures? I'm having trouble napping.
I defurnately thinks Jack should be the head of Furland Security.
You should see Merlin's encounter with a screetchy squirrel. Fence jumping deer, crazed squirrels...shudder. I'm sos glad I'm inside

Jack, fank you sooooo much fur the infurmation. I gotta add one fing bout moose... They also live in a place called the You Pee, part of Michicat north of Whiskonsin. That's too close fur comfurt! My beans drove thru there an said there had been 3 moose-car accidents, an one was a POLICE car, so they's truely rebels.
I'm stayin inside. An lockin the doors.

There were 15 elk across the field from our house the other day. What should we do?

This was very informative - perhaps you should think of having it published in book form for cats?

Latte, oh my! Chase is a very lucky cat to be alive. After I did all my research I have come to decide the vishus moose-deer are clearly the baddest of the bad in the vishus deer world, lurking behind trees, attacking people in cars, even police officers Victor says!

G, M and C, clearly your mom's uncle IS crazy. She should definitely stay away from him. I bet he lived up north once. I'm keeping a close watch on my humans to make sure they don't go crazy too.

Victor, Michigan is close to Canada. Some of our vishus moose-deer must have come down to hunt.

Patches, HIDE!!! Try to persuade your outdoor buddies to come in, or at least stay close to the house. Whatever you do, DON'T APPROACH THEM!!!!! Especially that many. You have a gang, and they're even more trouble in a gang. And get some of Mao and Rocky's Vishus Deer Repellant.

Lux, hmmm, a book? I think I'd have to do more research on vishus deers all over North America, 'cause just 4 types of vishus deer is too little for a book (but too many for the safety of cats!)

And Loki, I don't think I should talk about my nightmares where young kitties might hear them.

You certainly are an authority on the vishus deer, Jack! We don't have any in London but my mum and dad saw some when they went to Scotland and also when they went to Mericky to stay with Uncle Sim in Montana.

Thank you for the purrthday wishes you sent me!

What an impressive resource! Well researched, well though out, well presented. Something every Cat should keep by his bedside.

Hijack. Hoo boy how tired of that salutatation are you. Sorry I had to say it. My name is Fat Eddy. I'm not related to Fat Eric, but he is a friend of mine. I never stopped by your site before but I'm glad I did, because I too live in the north part of Canada. We have lots of vishus critters around my house...but I don't worry much, becaues the most vishus creature I get close to is Sam the Dog...Stoopid dog. Gotta go. It's bed time and the man peep isn't home tonight, so I get to sleep with the lady peep...

You can see me here

I see a lot of deer around my house, I don't know for sure what type of deer they are,so I think I will keep my distance.http://www.deerfarming.org