Today I give you an extra veryveryvery special Family Friday! 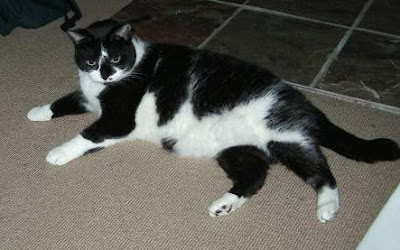 This is my brother Pepper. My REAL brother, my littermate, my snugglekitten-bro. Well, his name is Crawford now. Has been since he was 3 months old, but he was Pepper he lived with me and my OTW. 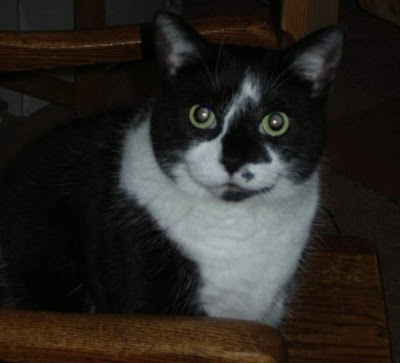 He was called Pepper because we had another brother named Salt, and Salt and Pepper both had all these white hairs in their black furs like Persephone had before they all fell out, and Pepper had a black spot on his nose.

I thought my OTW was lying when she said this was Pepper, 'cause the black spot on his nose was just a little spot. But it grew! It grew all over his nose and half his face!!

Also, I remember him being a lot smaller. 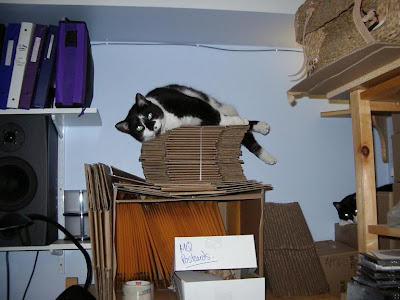 Apparently he likes boxes too. 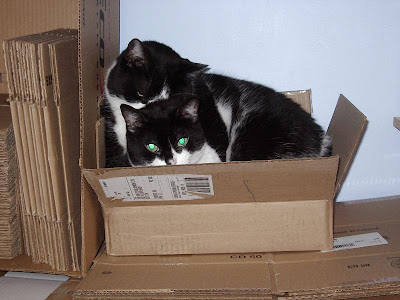 I guess they got to be friends!
Posted by Jack, Persephone, Tenzing and Lancelot at 12:57 AM

Thanks for introducing us to your littermate! Pepper/Crawford is a handsome cat. The black spot on his nose is cute - funny how it grew as he grew!

Awww Pepper AKA Crawford is a very handsome kitty. I bet you were glad to revisit with him!!

They sure look very happy together. FAZ

Pepper/Crawford is very cute! I guess good looks run in your family.

Crawford looks like he is a great companion to Meg! I hope my new brother works out as well for me!

Gosh, they're 2 great looking cats. Of course, I'm partial to black & white being a tuxie myself!

Memories of Eric and Flynn said...

Pepper and Meg are two lovely looking kitties. We haf nefurr seen our littermates since we went to our furrefurr home. Mum sez they live less than two miles away.