James: And we're back Lisa! Now we're going to look at what's been happening at the Synchronized Snoozing event at The Island Cats, where Canadian Cat-hletes Jack and Persephone have already launched into their Short Routine, as we saw before the break.

Lisa: Michael, can you take us through a replay of what happened at the Snoozing arena? 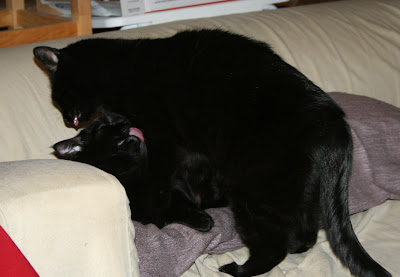 Michael: Yes, Lisa! Well, Jack and Persephone had just finished Round 2 of their Boxing/Bare Paw Fighting match and were expected to begin Round 3 when Jack jumped back onto the couch-ring. Jack looked to be trying to maximize on his feigning of nonchalance by starting a mutual grooming with his sistercat Persephone. We were expecting a lightning ear-bite, when Jack stunned the crowd by turning away! 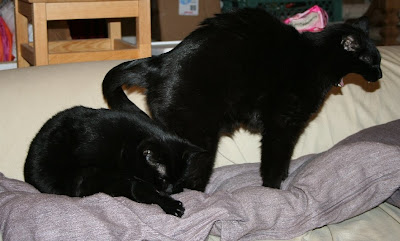 A good yawn-and-stretch on Jack's part, with Persephone getting in a few maintenance licks on her hind leg, and Jack settled near her on the pillows! 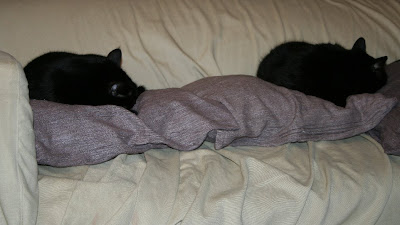 And without another meow, they launched right into their Synchronized Snooze Short routine, with a magnificent identical Curled-in-a-Ball, lasting a whole Half Hour! It was a shocking development, but no-cat can handle the sudden event change like these two crowd favourites! It was a flawless performance!

Lisa: Michael, what about the highlights from the earlier Synchronized Snooze Long Routine? I understand that took place yesterday during their first Boxing event? 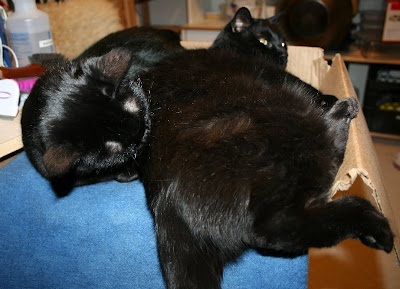 Michael: That's right, Lisa! During their previous, spectacular Boxing event, Jack and Persephone mixed in a Synchronized Snoozing Long Routine in a deconstrucing box! There were elements of snoozing in unison all along, like when they were both leaning on opposite weakened sides of the box, but it was near the end when they really started to show their snoozing form! After a quick background check of Jack's round back, Persephone settled in to the opening, and Jack quickly joined her in a side-by-side starting position. 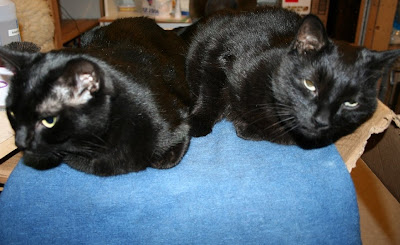 Their choice to outfit their box with a Comfy Blanket really helped them here, and the falling-apart box gave them plenty of room to maneuver. 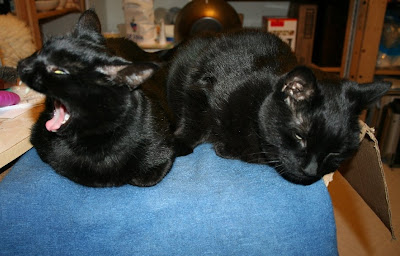 Persephone started them off with an extravagant yawn. 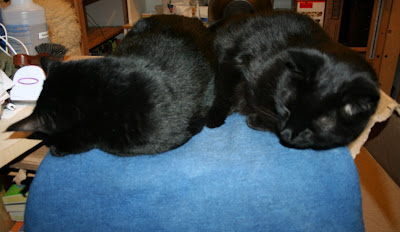 And they quickly settled into a Side-by-Side Side-Lying with curled under paws. 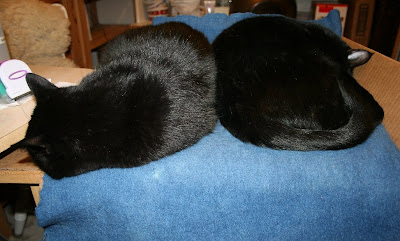 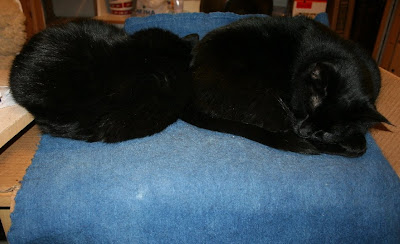 Slowly, over the course of about a hour, Jack rolled over and they both rotated a quarter turn in opposite directions, ending up in the very challenging-in-a-small-space End-to-End Mirror-Image Curled-in-a-Ball! Jack may have lost a few points on the inability to quite fit his booty IN the box, and hanging out over the desk, but this was a strategic decision on his part. You will remember it played a major roll in the final collapse of the box in the Boxing event!
And there you have it, Lisa; James. Yet another wonderful Cat Olympics performance from these dynamo Cat-nadians!
James: Thank you, Michael! And I don't think we're done see these two compete! I hear later today they may be trying for gold in the Hiding event, and Persephone is considering a solo attempt at the curling competition! We'll be back after this!
Posted by Jack, Persephone, Tenzing and Lancelot at 12:35 AM

Wow! That was quiet a performance! And the use of the ying and yang technique was brillant!! The judges were impressed!!

You guys do some great synchronized snoozing moves!

I can't wait for the next event! You guys are awesome!

Jim: What an impressive showing by this pair! Breaking up a bare-paw fight with a synched nap!

Meg The Mom: Loving the play-by-play!

Memories of Eric and Flynn said...

You two are definitely champion snoozers.

Hi, you guys! Love your Kitty-Limpics, how amazing!!! Just wanted to let you know that I read your blog faithfully, and you are one of the kitties who has inspired me to start my very own! You can visit me at http://attiecattieblog.blogspot.com and I even mentioned you in a link at the bottom of today's post! Hope to see you there. Have a super Sunday.

This is my first visit here, but I will be back soon, because I really like the way you are writing, it is so simple and honest

Amiable post and this post helped me alot in my college assignement. Thank you seeking your information.

I with you agree. In it something is. Now all became clear, I thank for the help in this question.

Wow... your site is so popular. I just wanted to know how do you monetize it? Can you give me a few advices? For example, I use http://www.bigextracash.com/aft/2e7bfeb6.html

I'm earning about $1500 per month at he moment. What will you recommend?

Also what in that case it is necessary to do?